The City of Kennewick has had four Line of Duty Deaths since it was incorporated in 1904.

Officers Joseph Holzhey, Marshal Mike Glover and Deputy Marshal Forest Perry were shot and killed as the two officers and a posse attempted to arrest several burglary suspects at a hobo camp. During the ensuing shootout Marshal Grover, Officer Holzhey, and one of the suspects were shot and killed. Another suspect and several other posse members were wounded.

Partolman Joseph Holzhey (EOW: 11-01-1906)  - Officer Holzhey was able to get rounds off but still got shot and died the following day from his injuries. He was buried in Moray, Doniphan County, Kansas. His memorial was held at the Methodist Church, at 3 o’clock Monday afternoon, were held the funeral services of Joseph Holzhey. The entire community turned out to pay respect to the memory of the man and officer who gave his life as a sacrifice to duty.

The funeral oration was pronounced by Rev. O.C. Helleckson, a Lutheran minister of Genese, Idaho, who took the very appropriate text, “Be thou faithful unto the end, and I will give thee a crown of life.”

Joseph Holzhey was 33 years old had been brought up in a good home according to the rules and doctrines of the Lutheran church. In boyhood he had been confirmed in that church and had received the religious instructions given in the parochial school of the denomination.

He has lived here the past three years and everyone in the town speaks well of him, the large attendance was a testimonial of the high regard in which he was held. This is especially true, because his brother, Martin Holzhey, and nephew E.C. Overmeller, did not arrive from Bedina, Kansas, until Sunday evening and no definite arrangements could be made until their arrival. Arrangements were made Monday morning and word was past around and the entire community responded. Appropriate music was furnished by a quartet consisting of Mrs. O.W. Rich, Mrs. J.B. Rose and Messrs. Reed and Haney, while the band, of which Mr. Holzhey had been a member, played the beautiful march “Flee As A Bird” on the way to and from the church.

The body was taken to Bedena, Kansas, that night in charge of Mr. Overmiller, while Mr. Holzhey remained here to look after some matters in connection with his brother’s estate.

The people here have paid the last tribute of respect and honor the three who fell in line of duty, but their memory should long be cherished and the day of their taking away observed as the “Hero Day’ for years to come. 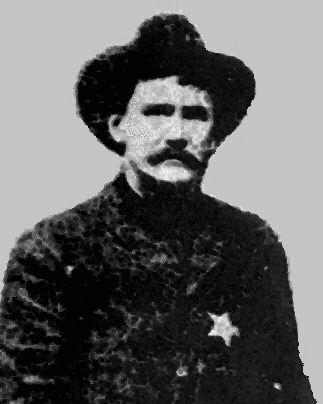 Marshal Michael D. Glover (EOW: 10-31-1906) - Marshal Glover went for his firearm but was shot and died instantly from at least one rifle round. He was buried at Riverview Heights Cemetery, Kennewick, Washington. His memorial services were held at The Woodman of the World, have charge of the arrangements for the funeral services of Marshall M.D. Glover. The funeral will be held at the Methodist church tomorrow at 10 o’clock. The services at the church will be conducted by Rev. J.F. Smith and Rev. J.H. Wood at the grave the ritual service of the Woodman of the World will be performed by the lodge of which the deceased had for a long time been a member.

At ten o’clock Saturday, from the M.E. Church were held the funeral services for the late City Marshall M.D. Glover. All the business houses in town were closed during the forenoon and the church crowded to its full capacity by the congregation which assembled to pay respect to the brave officer who had given his life in the performance of his duty.

The body was escorted from the home to the church by the local lodge of the Woodmen of the World of which order the deceased had been a long time member. REF: The Kennewick Courier, Kennewick WA, Vol. V No 28 Whole Number 236, Friday 2 Nov 1906, Front Page

Rev. J.F. Smith, of the Presbyterian church delivered the funeral address taking for his text the verse in the Book of Job which says: “And the days of my existence as swift as the shuttles of a weaver.” The minister drew from his text an impressive lesson on the brevity and uncertainty of earthly life and paid tribute to the unfearingly man who had paid with his life for his devotion to his duty in upholding the law and order of our city.

Rev. J.H. Wood of the M.E. Church, assisted in the service with prayer and scripture reading. A choir consisting of singers from the three churches rendered the vocal music and the Kennewick Band played the funeral march on the way to the cemetery where the remains were laid at rest, the Woodman Lodge conducting the services at the grave.

The deceased leaves a widow and five young children, the oldest not yet in his teens, to mourn the loss of a kind and sympathetic father. The loss will be sad to them, for many times when the writer has gone down home with Mr. Glover the little folks would rush out to meet him and a jolly play time would ensue which showed what a fond sympathetic parent he was to them and how close and tender their relations were with him whose conversation told that they were always near to his large warm heart.

Marshal Glover was sworn in, he took out a “warrant” for $120, which I assume is like a loan, to buy a lot for a jail in Kennewick. It is unclear if he saw the jail completed or not. Here is a picture of the first Kennewick jail sometime after 1905.

Deputy Marshal Forest Perry (EOW: 11-01-1906) - Deputy Perry was killed the following day after the shootout. He had been deputized for the manhunt for the suspects that were involved in the shootout. He located one of them hiding and told the suspect to show his hands. The posse then shot Deputy Perry several times thinking he was the suspect. He died at the scene. He was buried at Tahoma Cemetery, Yakima, Washington.

The funeral services for Forrest E. Perry were held in the parlors of the Columbia Hotel and were attended by the city officials and by all who could find standing room. Rev. Wm. Snape preached the funeral sermon from the text “Be of good courage.” He pointed out that the young man had displayed Christian courage. In his effort to assist in the capture of the outlaw, he was subjecting himself to danger without thought of reward. As he was acting without any thought of {?} or reward he displayed the highest quality of moral courage; the moral courage consists in an unselfish performance of heroic acts without fear or intrepidity. His relatives and friends will always remember him as one who played the hero’s part and showed strong and manly qualities under most testing circumstances. All honor to his memory.

The funeral party consisting of the immediate relatives and a few of our citizens accompanied the remains of Forrest Perry to North Yakima last night. The funeral services were held at the Shaw Undertaking parlors there and interment was in the Tahoma cemetery, beside his father who died a few weeks ago.

Perry was 24 years old and married. He has been living on Frank Emigh’s ranch below town. Every one who was acquainted with him spoke very highly of him as a young man of finest qualities and character.

MANY GIVE MONEY FOR MRS. JESSIE PERRY

A subscription paper for the benefit of Mrs. Jessie Perry “on account of the unselfish and valiant services by the late Forrest E. Perry in the capture of the outlaw” was circulated yesterday by W.S. Jenkins and $225.20 raised and paid in to him during the day. This amount provided for the funeral expenses and left quite a little sum in cash besides.

ef Charles E. Copeland (EOW 04-02-1933) - On Friday, March 31, 1933 at about 2000 hours, Chief Charles Copeland of the Kennewick Police Department was struck by a train by the Eastside Warehouse. The train was traveling without lights when it struck Chief Copeland, who was investigating a suspicious subject in the area.

Chief Copeland died from his injuries three days after the incident on April 2, 1933. Buried in Riverview Heights Cemetery in Kennewick, Washington.

Chief Copeland served Kennewick Police Department as Chief on three separate occasions and had been in law enforcement for twenty years.